SSC CHSL Syllabus:-SSC Combined Higher Secondary Level (CHSL) Syllabus 2020 has been well defined by the Staff Selection Commission ( SSC). SSC CHSL Syllabus though is vast, but with proper strategy, you could ace the exams effortlessly. Knowing The SSC CHSL Syllabus will Allow You to Comprehend the requirement of this CHSL Examination. The Upcoming plan could be easily framed by having a good comprehension of the SSC CHSL Syllabus, which is the very first step of your groundwork trip. Applicants should go through the complete SSC CHSL Syllabus because the competition is slowly climbing the ladder every year and candidates should leave no space for mistake. This article will provide you with all the details of SSC CHSL Syllabus 2020, which means that your preparation will be on the right path. 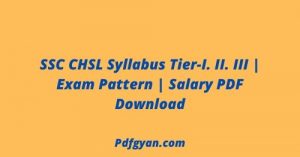 Go through the complete tier-wise SSC CHSL syllabus below:

As mentioned above, SSC CHSL tier-I is divided into four parts. Check tier-I syllabus for all parts below:

As mentioned above, SSC CHSL tier-II exam requires candidates to write an essay and a letter/application in 200-250 and 150-200 words, respectively. Although the Staff Selection Commission does not prescribe any syllabus for the tier-II exam, some of the common topics on which questions are asked in the paper are:

SSC CHSL tier-III is a skill/typing test, which tests the typing/data entry speed of candidates. Similar to tier-II, the Staff Selection Commission does not prescribe any syllabus for the tier-III exam also. In this test, however, candidates are given printed matter, which they have to type on a computer.

The Tier-I paper will be objective type. There will be 100 questions for which candidates will get 60 minutes.

There will be a Descriptive Paper (Offline, Pen & Paper Mode) in SSC CHSL Tier-II Exam. You can start your exam with any of the following sections given in the below table.

Note: Minimum Qualifying Marks in this exam is 33%. Marks of this exam will be calculated in preparing the final list of qualified students.

(i). Must have passed 12th Standard or equivalent examination from a recognized Board or University.

(ii). For Data Entry Operator in the Office of Comptroller and Auditor General of India (C&AG): 12th Standard pass in Science stream with Mathematics as a subject from a recognized Board or equivalent.

Disclaimer :- Freenotes.in does not claim this book, neither made nor examined. We simply giving the connection effectively accessible on web. In the event that any way it abuses the law or has any issues then sympathetically mail us.